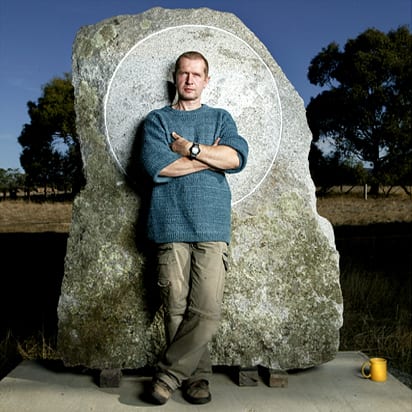 Ashika in front of a sculpture in his
Embraceart Studio, Victoria, Australia

I have a soft spot for hard stone. My journey with stone began in 1977 when I was 18 years old, travelling alone in the windswept tundra of Canada’s Yukon Territories. In the middle of nowhere, I came across a monolith, half sunk into the permafrost. Someone unknown had carved it, paying reverence to the power of nature. I will never forget that moment, when standing in that vast silence, I embraced a message in stone for the first time.

On a personal level, and from the perspective of time, I am giving back to Nature what She gave to me. It’s a full circle. My journey with stone has helped me to find peace and joy. And with nature’s offerings, to create works of serenity and timeless beauty.

Born in Poland in 1959, emigrated to Canada in 1975. During 1979-81, first experimented in environmental sculpture while living with Athabascan Indians in the Yukon. In 1998, established Embrace Art Studio in Australia, with his wife and fellow artist, Padma.

Exhibitions and installations of his work have appeared in: